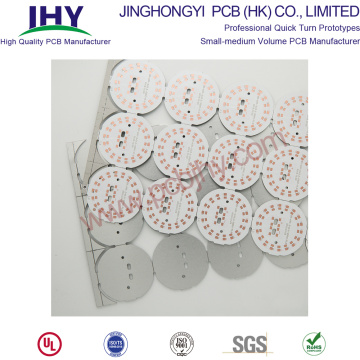 JingHongYi PCB，High quality and cheapest Single Layer PCB supplier and manufacturer. We has many years experience in fabricating single layer LED PCB, aluminum PCB and PCB Assembly. With our advanced engineering & production team and high-end manufacturing equipment,ensures perfect insulation between each layer and good performance of every conductor in multilayer PCBs.

(Bar, Round, Number, Letter, Irregular, etc) ALL Shape / Size / Color / Thickness could be Customize upon request. In addition, we can provide SMD processing services.

Jinghongyi PCB is one of the many PCB manufacturers and suppliers in China, especially good at the manufacturing and fabrication of single-sided printed circuit board（have a hole or no hole）, double-sided PCB and Multilayer PCB. The company has been engaged in PCB manufacturing for nearly 10 years, and has rich experience in the production of single-sided PCB and double-sided PCB. Due to the continuous expansion of electronic product market, PCB application market has also been vigorously developed. So single and double sided PCB is also one of the most common PCB types we see. As a result, we produce the most single-sided and double-sided PCBs, so we constantly improve the manufacturing process and do everything possible to reduce costs for customers. Therefore, our single-sided PCB price is also the lowest. Our advantage is not only reflected in the price advantage, but also we can provide you with the production of PCB prototypes, small and medium-sized batches and PCB assembly services.


Our aim is to provide customers with the best cost-effective products and services. At the lowest cost, we also guarantee the best quality of your products. Therefore, we choose FR4, phenolic paper base plate, CEM-1 and CEM-3 composite copper clad plate and other materials, mainly according to the needs of customers or to specify which materials to use.

In addition, our experienced engineers can provide you with product manufacturability inspection and PCB design assistance. You just need to provide your Gerber files.


Single Sided PCBs, also called Single Layer PCB, contain only one layer of conductive material and are best suited for low density designs. Single sided PCB'S have been around since the late 1950s and still dominate the world market in sheer piece volume. Single-sided printed circuit boards are easily designed and quickly manufactured. They serve as the most cost effective platform in the industry.

There are many similarities and differences between single sided PCB and double sided PCB, and we will also explain them here.


One thin layer of thermally conductive but electrically insulating dielectric is laminated with copper. Soldermask is usually applied on top of the copper. 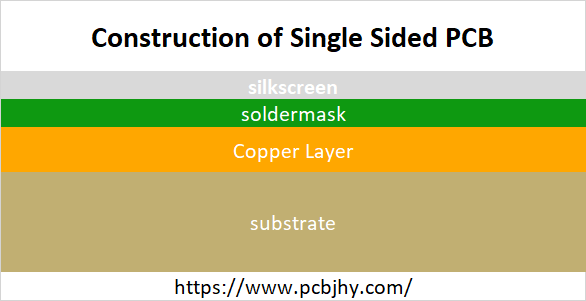 The base material, which is also named as substrate, is composed of insulating fiber glass which gives PCB strength and compact look. The nature and type of base material defines if board is going to be Flexible PCB or Rigid PCB.

Above substrate, there lies a copper layer which provides conducting path for various components on the board. The copper thickness is different for different boards depending on your needs and requirements and is defined in ounces per square foot.

On the top of copper foil, there exists a solder mask layer. This layer is mainly used for protection and makes the copper foil insulating which helps in avoiding the conduction in case direct contact happens with some conducting material.

On the top of all layers, there exists a silkscreen layer that is mainly used for adding symbols and characters on the board so a common person can anticipate the clear understanding of the board.

ALTHOUGH SINGLE SIDED PCBS ARE RELATIVELY SIMPLE, THEY CAN STILL BE USED IN VERY COMPLEX DEVICES:


PCBs are more suitable for project design as compared to double sided PCBs and vice versa.

Before you pick any type of PCB for your project, you must take one thing into consideration that single sided PCB layouts are more difficult to route as compared to double sided PCB, but following are the reasons why you should put an effort for making and picking single sided PCB over other PCBs.

As one of leading printed circuit board manufacturers based in China, JHYPCB has been offering international companies of all sizes with high-quality PCB prototype to production services at fair price for 8 years. To make professional and advanced circuit boards, we're committed to adhering to the strictest standards during PCB manufacturing process, we're fully compliant with the ISO 9001:2008 quality management system.

To deliver true value and convenience to our PCB fabrication clients, we expand our business to components sourcing and turnkey PCB Assembly services ranging from prototype, low-to-middle volume to high volume up to 1 million pcs. We can mount components on circuit boards using surface mount technology (SMT),through-hole technology (THT), and manual insertion:

One stop service include